The Vineyard Movement USA has adopted a strategy for doing missions called Missions Partnerships. Here is the beauty of the plan: It allows a church to really impact another country with the gospel through a focused long-termed investment. It brings Vineyard churches together to focus on a particular country. We get to pool our resources and do together what no one church could do by itself.

Here in New England we are focused on Iberia. 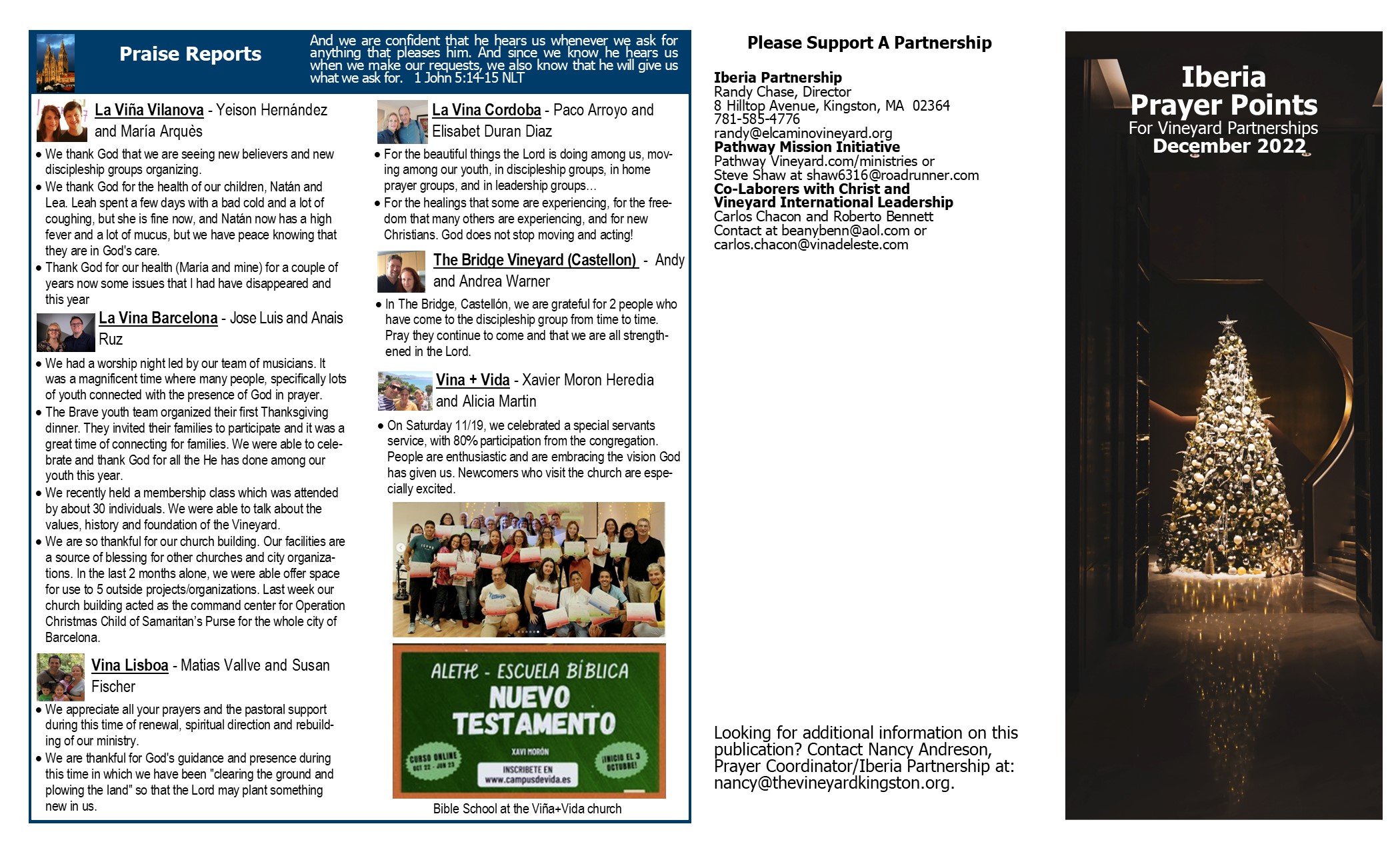 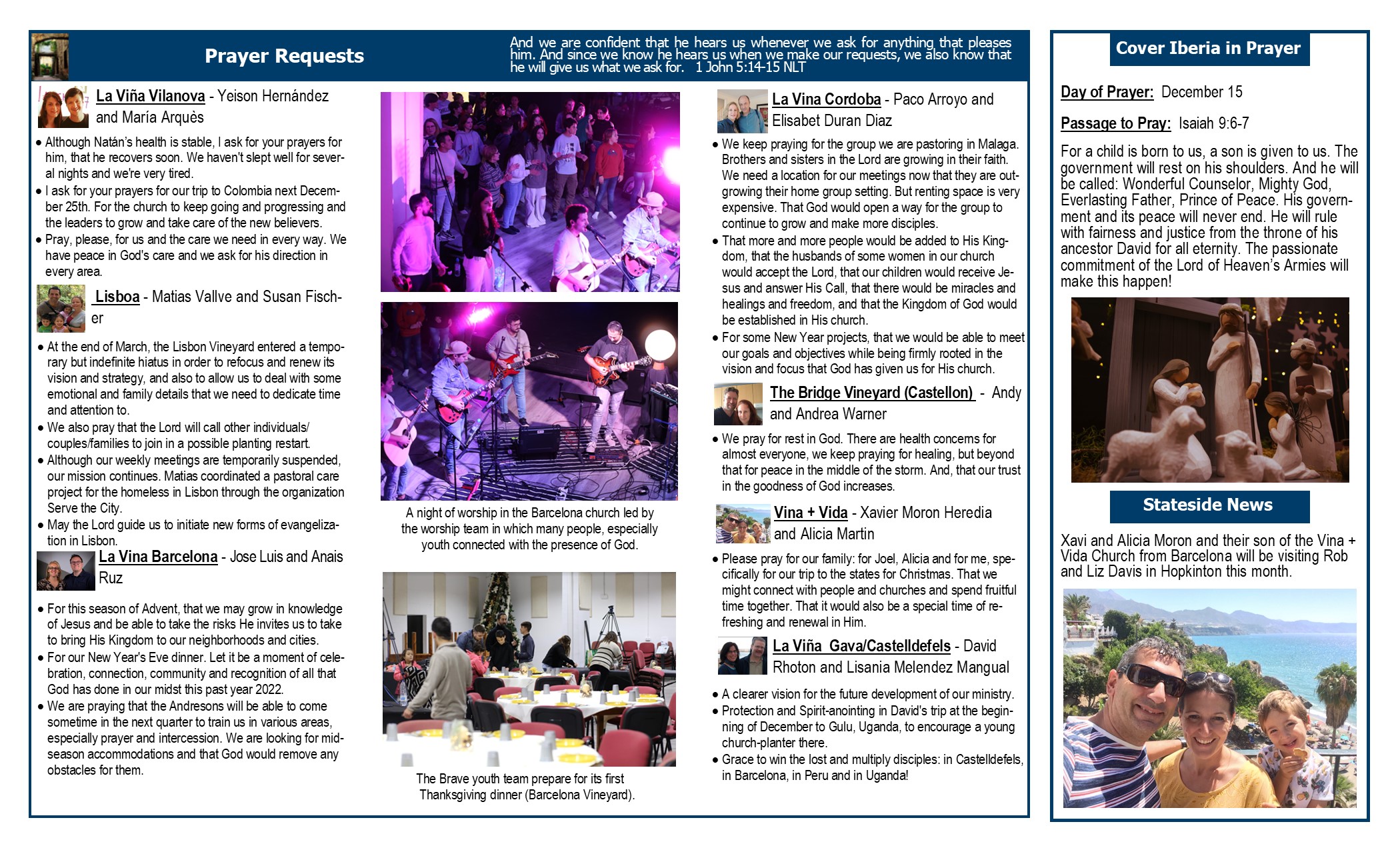 We work together with 11 other Vineyards in our region through an organization called The Iberia Partnership (formerly Partners for Spain, and before that, IAM). We chose Spain because one of our pastors, Phil Strout, who is now the National Director of Vineyard USA, had for years worked in Chile and developed the heart and vision to see Spain reached for the gospel. When he returned to the States to pastor, he convinced a few other pastors from our area to travel with him to Spain to explore targeting that nation as the nation we would all focus on together.

Our Senior Pastor, Don Andreson, went on that trip. While there, Don became convinced that this was where we should become involved. That was in February of 1992. At that time, there was no Vineyard presence in Spain. In fact, most missions organizations were pulling out of Spain due to its being such a difficult, fruitless field. Spain, which is traditionally Catholic, has a .02% population of evangelical Christians. Within the Catholic Church 30% of those who at one time were baptized – no longer claim any link to the church and another 50% are inactive. It is a Christian wasteland. The majority of the smaller towns have no evangelical church or witness.

Since our involvement, nine Vineyard churches have been birthed in Spain. Each is in a different stage of development. Our goal in going to Spain was to see a Spanish Vineyard church planting movement. It hasn’t been without plenty of challenges and many disappointments, but it is happening. It’s been exciting for us to be part of that process. It has been amazing to see that as we are part of God’s change agent in Spain, Spain has become part of God’s change agent in us.

Since 1993, we have had over one hundred individuals from our church travel to Spain to minister. Many have returned on several occasions. Many of these individuals could not have made the trip had it not been because we have adopted the same policy for our church that the Vineyard Movement has – doing together what we can’t do by ourselves.

Spain and Portugal are known as the Iberian Peninsula. We are now praying and going to both countries. In 2015, the first Vineyard Church plant landed in Lisbon, Portugal. They joined with the La Vina churches in Spain, and Partners for Spain became the Iberia Partnership.

We have seen thousands and thousands of dollars raised to help people from our church become ministers in Iberia. Many in our church are Associate Members of the Iberia Partnership, who give on a regular basis to help the work in Iberia grow. We support one full-time missionary and contribute to the needs of several of the churches in Iberia. We regularly pray for Iberia. Our children are involved in Iberia. When we do a trip all of us support those who travel with prayer.

Do we support Missions elsewhere? Sure we do! We have a heart to see God’s kingdom grow in every country of the world. We pray to that end and we rejoice in the things God is doing everywhere. Iberia, however, is our focus.

From time to time we take a special offering to help someone become involved in a short-term trip to minister in another nation. And we have helped many of our teens take missions trips to other places. We recognize that God calls people to different fields of service. If you feel a call to full-time missionary service we want to bless that. We will do our best to help you connect with the Vineyard Missions Partnership that is working in that country.

We expect to see everyone in our church participate, on some level, in overseas missions. Whether going, giving, praying or hosting. Together we can impact the world for Jesus. Together we can also see Iberia impacted for Jesus. Our hope is to one day soon see the Vineyard in Iberia grow to such an extent that we can focus on another country. To see them forming their own missions partnership targeting other countries will be the icing on the cake!